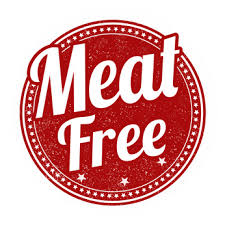 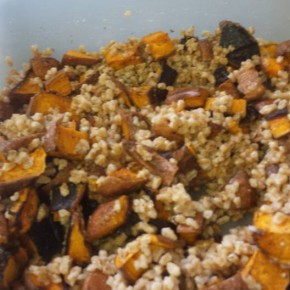 Lunch was roasted sweet potato and farro salad. I had never eaten or bought farro before so I was really excited about this one.  It was easy to cook and very nutty and creamy texture. I served it over arugula for some bite and texture. I love sweet potatoes so this one was amazing. I will do this again. I did have a bit of trouble finding the farro. I did not know what it looked like. I thought it would be near the other grains like couscous and quinoa. My local grocery store did not have it. I found it a Earth Fare. I am sure it is available other places as well. I tossed this with my molasses vinaigrette. Yes, I made that up. I usually make a honey lime vinaigrette, but I did not have any honey or limes. I looked in my cabinet and there was a jar of molasses just sitting there. I used apple cider vinegar and vegetable oil because it has a milder flavor than olive oil. 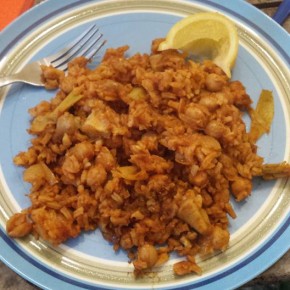 Dinner was Spanish Paella Chickpeas and Rice. Okay, I love a good paella and I would definitely make this one again. I added a bit too much cayenne so I got a high kick in the throat, but I calmed it down with a side of watermelon. The artichoke hearts and chickpeas gave this dish the texture it needed. Yes, the meat would have been nice, but this dish was substantial on its own. I used a vegetable bullion cube instead of the broth because I was told it was more economical. so just make sure you read the label and check for sodium. Since I hate cooked tomatoes (it’s a texture thing) I used tomato sauce instead of the diced tomatoes. And the lemon juice is a must. There is just something about fresh squeezed lemon juice that makes the dish perfect.

Day of the four was a huge success. I just used the flavor profiles I like and found meatless recipes that fit them. And I did not follow any recipe to the letter. I used spices that were in my cabinets. I did not buy anything new. 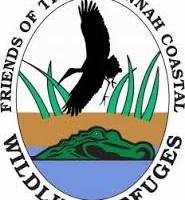 I have been drafted! Not into the military, been there done that, plus am probably too old to go back even if I wanted to. I am joining...
© 2014 Doretha Walker,Phd Web Design: Laura Olsen
Back to top
Posting....