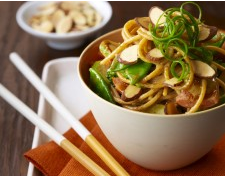 Now for something a little bit different and exciting.

Whole wheat noodles, crisp snow peas, broccoli and red bell pepper are accented by garnishes of scallion and crunchy sliced almonds. But the showstopper to this dish is the spicy almond sauce that packs a wallop of heat.

Bring a large pot of water to a boil. Toast the almonds in a dry skillet over a medium-heat heat, stirring frequently, until they are golden, about 3 minutes.

While the pasta is cooking, make the sauce. Place the almond butter, soy sauce, lime juice, brown sugar, chili-garlic sauce and three tablespoon of boiling water (from the pasta pot) into a large bowl and whisk until smooth.

Drain the noodles and vegetables, return them to the pasta pot, add the sauce and toss to coat. Serve garnished with the toasted almonds and scallion greens.

This recipe comes to us from our friends at the  Almond Board of California and was developed by dietitian and cookbook author Ellie Krieger.